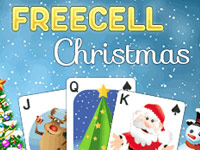 A nice Christmas-themed version of Freecell Solitaire. FreeCell is a solitaire card game played using the standard 52-card deck. It is fundamentally different from most solitaire games in that very few deals are unsolvable, and all cards are dealt face-up from the very beginning of the game. There are four open cells and four open foundations. The top card of each cascade begins a tableau. Tableaux must be built down by alternating colors. The game is won after all cards are moved to their foundation piles.

Our visitors have given this game a rating of 7.9 out of 10.

Freecell Christmas is an online game made with HTML5. This game will work in all modern browsers.

View all in this category
© 2023 SolitaireCorner. All rights reserved