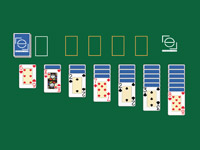 Klondike is the best-known solitaire card game. It's the game that many refer to as just "Solitaire" or "Classic Solitaire". While the game is known as Klondike in the U.S. and Canada, it's often called "Patience" in the UK. In other countries the game is called American Patience. Lesser known names for Solitaire are Fascination, Triangle or Demon Patience.

The four foundations (light rectangles in the upper right of the figure) are built up by suit from Ace (low in this game) to King, and the tableau piles can be built down by alternate colors. Every face-up card in a partial pile, or a complete pile, can be moved, as a unit, to another tableau pile on the basis of their highest card. Any empty piles can be filled with a King, or a pile of cards with a King. The aim of the game is to build up four stacks of cards starting with Ace and ending with King, all of the same suit, on one of the four foundations, at which time the player would have won.

Our visitors have given this game a rating of 6.8 out of 10.

Klondike Solitaire Classic is an online game made with HTML5. This game will work in all modern browsers.

View all in this category
© 2023 SolitaireCorner. All rights reserved